Thursday:
Woke up today to find my hard disk had died. Luckily I have everything backed up online, but it's still going to delay me a bit. Have to wait until tomorrow for a new disk to be delivered, and once that's in it's going to take a while to download all 51GB of data back on to it. There are still some bits a pieces for missions I can get done while I'm waiting however.

Friday:
New hard disk eventually arrived (was supposed to be before 9am but didn't get here until 3pm). Since then I've been fighting with the stupid online backup service's data restore process. Got the first 10GB of data, only for the software crash. After restarting the restore it went right back to the beginning >.< I'm now attempting another restore method. At this rate I probably won't have all my necessary files until the end of tomorrow. Unfortunately all of this is beginning to cut a serious hole in my schedule as there isn't much else I can do until my files have been restored. So looks like there is going to be a delay on the missions being released.

Saturday:
Managed to get my most important DF files downloaded overnight so was actually able to get quite a lot of mission stuff done today after all. Aiming to have something ready for GM's in the next few days.

Sunday:
Missions
Posted by AdminPwn at 09:19

Wednesday:
Was with Nastya in hospital most of the day. Not going to go into detail but was all fine in the end.

Sunday:
Missions
Took Matty to the park
Posted by AdminPwn at 04:32 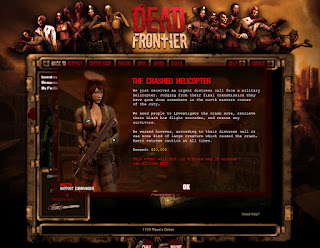 Some of you asked about an ETA for the missions. I expect to have the core system finished sometime around the 25th of this month. Although, we wouldn't have any proper missions created, so I'd expect another week after that before we would have enough for things to be playable. So GMs should have access to some missions at the start of next month, and everyone else will get them a couple of weeks after that.

Sunday
I'm spending today making some changes to the game.

- Made it impossible for other people to see your credits and inventory contents. This was a response to complaints about privacy.

- Raised the exp required for levels 30+. The sudden surge in the number of level 200 characters was a wake up call that the exp rate had gotten a bit too high. Once missions are released it'll be possible to gain even more, so something had to be done to stop the game getting too easy.

- Level 200s now have permanent access to the Dusk shop. This a response to complaints that anyone with a lot of real life commitments would never be able to dedicate an entire week to winning entry into the Dusk shop, and therefore would never be able to have the best equipment in the game. So instead it's now possible to eventually get the Dusk gear by levelling less frequently over a greater period of time.
Posted by AdminPwn at 09:35

Sunday:
Bug fixes for Anti-Cheat
Took son out for the rest of the day
Posted by AdminPwn at 12:39