To celebrate Halloween today, we're giving everyone double their normal EXP for the next 24 hours. Enjoy!

In other news as I'm sure most of you already know, Dead Frontier now:


Unfortunately I didn't finish getting those 40 new missions implemented due to being sidetracked with the above things. However I will now be adding those very soon.
Posted by AdminPwn at 01:56

To celebrate Halloween 2011 we've just released some cool limited edition equipment: the Corpse Carapace and Corpse Mask. They are only available until November 10th so get them while you can! 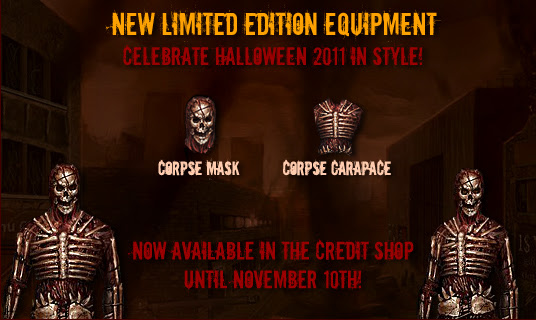 Check them out in the Credit Shop:
http://bit.ly/frN5dD
Posted by AdminPwn at 09:47

It has begun. Everyone will receive triple EXP for the next 8 hours. Enjoy!
Posted by AdminPwn at 11:08

Why am I doing this? Well we really want to see how well our servers can handle an abnormally large number of players. We want to get literally as many people online as humanly possible during that time, so we can find any weaknesses. This will mean that in the future a large spike in player numbers will be less likely to cause problems for our servers, which will make the game far more enjoyable for everyone.

So, make sure you're online tomorrow between 2pm and 10pm EST! And if you have any friends who have a DF account, be sure to tell them about this mini-event :)