March of the Living Now Available on Steam - Claim your free implant!

March of the Living is now available on Steam for PC/Mac!

We are offering a free gift for all Dead Frontier players who decide to buy March of the Living before April 30th. The MOTL Implant grants +5% Speed, +5% Damage and +5% EXP. 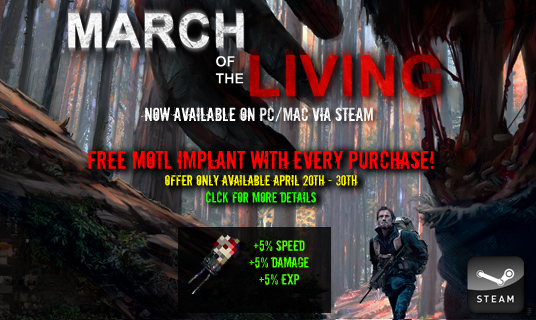 See here for more details:
http://fairview.deadfrontier.com/onlinezombiemmo/index.php?page=57
Posted by AdminPwn at 06:07

March of the Living Release and Free Gift

March of the Living is new zombie survival strategy game being published Creaky Corpse Ltd (but developed by Machine22). We're happy to announce that the game will be released for PC/Mac via Steam on April 20th, for a price of $13.49.

Check out the trailer:

We're also offering a free gift for all Dead Frontier players who decide to buy March of the Living in the first 10 days of release. The MOTL Implant grants +5% Speed, +5% Damage and +5% EXP.

If you're interested, simply add MoTL to your Steam wishlist and purchase between 20th-30th April. Then log into the Dead Frontier site, and check the announcements boards for details on how to claim your free gift.

Note:
We will only grant one MOTL Implant per Dead Frontier account. In addition if you buy multiple copies via the same Steam account, we unfortunately will not be able to give you multiple implants. The game must also be activated by you (not simply kept in your Steam inventory).