Our Halloween Madness event has just begun!Until the end of the week, all players will receive a +50% EXP bonus. In addition to this you can now hunt two new types of infected boss, which will only be spawning over the next 5 days. They'll also be dropping some unique, Halloween themed loot. So dust off your M60, put your forum trolling on standby and get your backside into the Inner City asap!  Happy Halloween everyone :-)
Posted by AdminPwn at 01:52

Introducing Halloween Madness!
We're going to be running a Halloween event that will start on Wednesday 31st October and continue through until Sunday 4th November. During that time all players will be able to hunt a new, rare class of infected that will only appear through Halloween. What's more, they'll be dropping some very special Halloween themed loot. Oh, and we'll be chucking in an extra +50% EXP for the entire 5 days as well! Don't miss it! :-)


And now for something completely different...

Everything has been going to plan nicely with the recent set of updates. As of now, here is what has already been completed:

And here is what I should have finished before the end of October:

New equipment will be coming, but unfortunately it won't be in-game until January 2013. This is mainly due to the time needed for our 2D and 3D artists to complete all the required pieces. I had previously said that there would be almost 100 new pieces of equipment, however after going through the details more closely, it turns out that number will actually have to be closer to 50. Sorry for the confusion.

I'm also very keen to get a complete overhaul of the multiplayer system implemented very soon. The main goal would be to convert the system from TCP over to UDP. This would allow for much more rapid communication which in turn should lead to vastly improved sync, and less lag related bugs. In theory it should also lead to an improved frame rate. I'd really like to get this done in early November, but I can't make any promises unfortunately.

To celebrate Halloween 2012 we've just released a new Limited Edition sub machine gun. The Corpse Ripper is the most powerful SMG in the game, and will only be available until November 5th so get it while you still can! 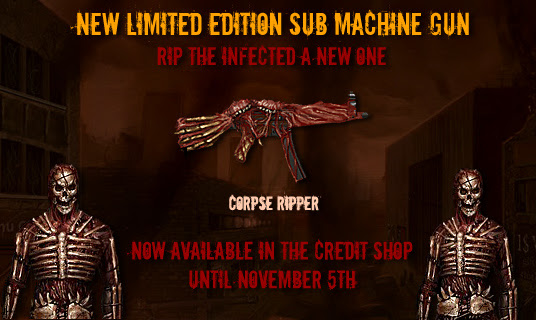 Check it out in the Credit Shop:
http://bit.ly/frN5dD
Posted by AdminPwn at 08:13

I'm just writing to let you all know that I'm still alive, and that Dead Frontier will be a getting another large update in the next month or so. Here is what I'm working on right now:

I also wanted to use this opportunity to come clean about what I've been doing recently.

I started work on Dead Frontier back in summer 2007. Prior to that I was a small indie game developer, who generally launched a new title every 6 months or so. I always had so many game ideas flying around in my head, that even with these ultra short development cycles, I could never even come close to keeping up with the pace of my own creativity.

Moving over to Dead Frontier was something completely different to me. It became so popular that it would of been a crime to let it stagnate; so I did my best to keep the updates rolling in. Unfortunately I started to find that even as early as 2008 I was itching to work on something new again. At the end of 2009 I essentially rewrote 90% of DF from scratch, which was a lot of fun and helped me to exercise my creative urges all over again.

However in early 2011 I was again desperate to start a new project. I knew that I still had plenty of work to do on DF and that starting something else now would be a bad move. I gritted my teeth and tried to keep myself focused on DF.

By December 2011 I had finally gotten DF onto much more solid ground, but it was definitely not yet finished. It then dawned on me that DF could never be finished. Even if I put in all the features I planned to put in, that wouldn't by itself keep everyone around forever. I'd always need to add things to DF. My previous plan of finishing DF 100%, and then working on something else would never really work.

So after much deliberation I decided the only way I'd ever have a chance of satisfying my creative side, whilst not letting DF die, would be to try and work on two projects at the same time. And that is exactly what I've been doing. Since the end of 2011, I've been working on a small fantasy duelling game titled "Doom Warrior". I'm doing my very best to split my time equally across the two projects, and I plan to continue doing that for the foreseeable future.

Whilst I'm sure this news will come as a disappointment to some of you, I want to assure you that this does not mean I'm no longer interested in Dead Frontier. DF has occupied more than 70% of my adult life and it will always be important to me. I always have, and always will be massive zombie fan after all.

No matter what happens with Doom Warrior, Dead Frontier updates (actual features & content, not just LE items) will keep coming every 3-6 months, most likely for the next 5 - 10 years.